That’s a wrap! Artexpo New York has taken the fine-art scene by storm yet again, and we’ve got the sales, stories, and gorgeous collection of photos and videos to prove it. We’d like to extend a huge thank you to everyone who played a part, from our extraordinary exhibitors and generous sponsors to our ever-eager attendees. Read on to find out more about 2016’s show—we’re proud to say it was another phenomenal one!

Moments to Remember
Throughout the four-day weekend, attendees enjoyed a number of exciting events, from the VIP Opening Night Preview Party featuring the unveiling of this year’s Poster Challenge winner to inspiring Art Talks, Meet the Artist sessions, and more. Famed dance photographer Jordan Matter wowed us all with his live photo shoots, and painters from around the world gave us a peek at their creative process during live art demonstrations. On Friday, author and industry leader Pamela N. Danziger gave the Keynote Presentation to a rapt audience of exhibitors and trade attendees.

Attendees find something to smile about around every corner.

2016 Artexpo Award Winners
Over a dozen artists and galleries were given special recognition during Artexpo this year for their work that went above and beyond. Here’s a full list of 2016 award recipients:

Top Sales & Success Stories
Here’s a sampling of some of our exhibitors’ top sales and feedback for the event. See more testimonials here!

Media Buzz
Artexpo New York garnered tons of attention in media outlets in New York and beyond, with coverage including a shout-out in PAPER magazine, which dubbed our show as a “must-see,” a segment on CBS New York, and many others. We also reached tens of thousands of fans via social media, offering followers around the world up-to-the-minute event tidbits and photos on Facebook, Twitter, and Instagram. Thanks to everyone liking and following us on our social media channels—we love keeping you engaged!

Kaleo in front of his pop art, with Gallery Giuseppe sculptures in the forefront.

The colorful artwork of Joel Amit.

Exhibit in 2017
Inspired by this year’s event to give exhibiting a shot yourself, or want to return to Artexpo after having a successful show this year? Apply for 2017 here, or contact our helpful sales team—they’ll be happy to help you. 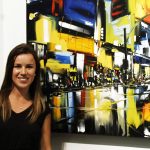 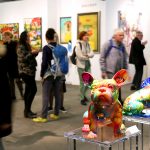 Artexpo 2017 Is Open! Join Us at Pier 94, Now Through MondayEducation, Events, Recap