Three coveted sculptural artists have carved a path towards female domination within today’s contemporary art world, each presenting a collection of work that embodies nature’s grand design. These leading modern-day sculptors are women who have risen to the top of their field by continuously pushing the boundaries of expressionism while using their own materials and mediums to portray thought provoking ideologies. Chae Rim, Rabarama and Alexis Silk introduce their latest exhibits at this year’s Artexpo New York – celebrating its 40-Year Anniversary as the world’s largest fine art marketplace – returning to Pier 94 in Manhattan from Thursday, April 19th to Sunday, April 22nd. These women, in a master class of their own, represent three artists not to be missed at this year’s Artexpo New York XL.

Chae Rim from South Korea, portrays dense forests, silent ponds and crepuscular evening scenery in her works. The mountainous landscape across Korea and China is one of the most understated wonders of the world. The seemingly arid rocks stack high toward the sky and give root to light-weight looking deciduous trees that give vibrant color to otherwise rough, stoic surfaces. The juxtaposition seen throughout this temperate environment continues to generate a particular exotic mystique. In the sculptural paintings of Chae Rim, “The Ten Symbols of Longevity” appear and disappear through thickets of metal-smithed foliage. Rim’s reductive representations of such a volume-filled subject further construes individual curiosity while her lyrical, calligraphic forms build a sense of illusion and atmosphere.

Chae Rim’s specialty is intricate jewelry design where she carves out the gestural painted line from materials such as silver, gold and nacre — also known as mother-of-pearl. Rim’s technique, moreover, highlights the handmade and sets each small filigree upon raised pins that are anchored into a densely-layered, lacquered surface. These traditional processes are referred to as ‘ottchil’ (lacquer), ‘saengchil’ (raw lacquer), ‘heukchil’ (black lacquer) and ‘chaechil’ (colored lacquer) to create ‘najeonchilgi’, the incorporation of nacre with lacquer.

Rim’s close attention to miniature details further elevates the role of iridescence in Asian art and also renews the significance of surfaces made with the glow of polished sea shell. Unlike silver and gold, nacre reflects a range of light pastel colors that appear and interact with light that reflects upon it. Within eight new compositions in an exhibition titled “Chanson de la forêt” (Song of the Forest), Chae Rim takes viewers through the idea of undiscovered wilderness such as forests, mountains, trees, wind and sunrise.

Chae Rim’s sculptural paintings range from single to multiple panels since her aim is to create a sense of outdoor space. Vast expanses of dark blue, green, red, gray and black lacquer give way to busy networks of shiny, leaf-like forms. “At Sunrise” presents a graceful, curving line of tiny gold fronds that hold calligraphic carvings of clouds and water. While making one’s way around the composition, smaller shapes signifying deer, turtles, and mushrooms emerge. The light reflecting a range of tones across the dark lacquer surface defines the sun, pine trees and bamboo. The shadows that appear opposite to the vast expanse of gold filigree transform the shiny surface into a suggestion of ocean water, as it appears still under moon and morning light. 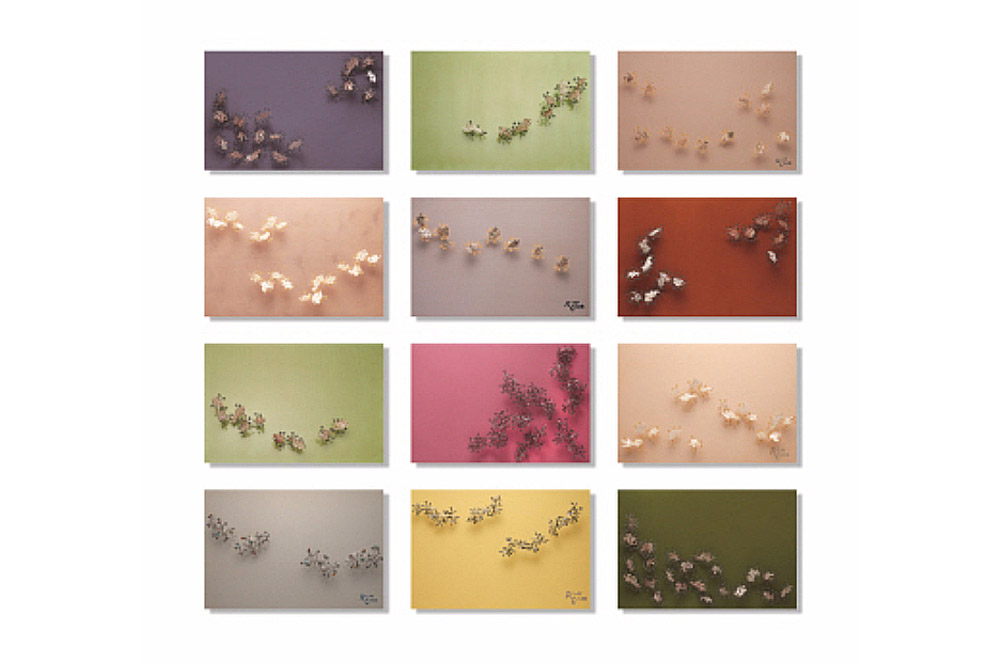 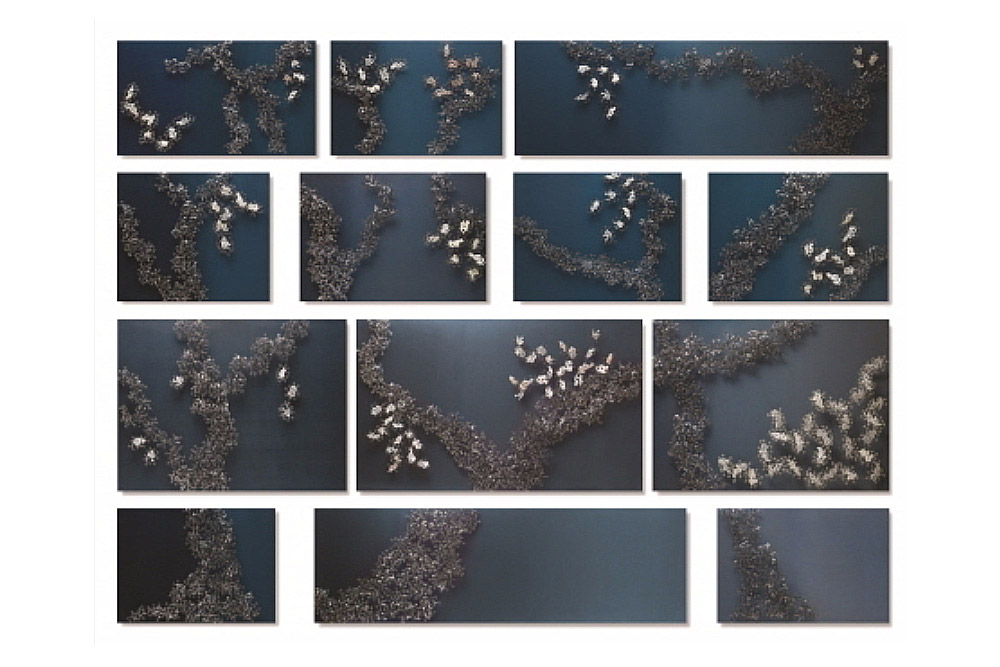 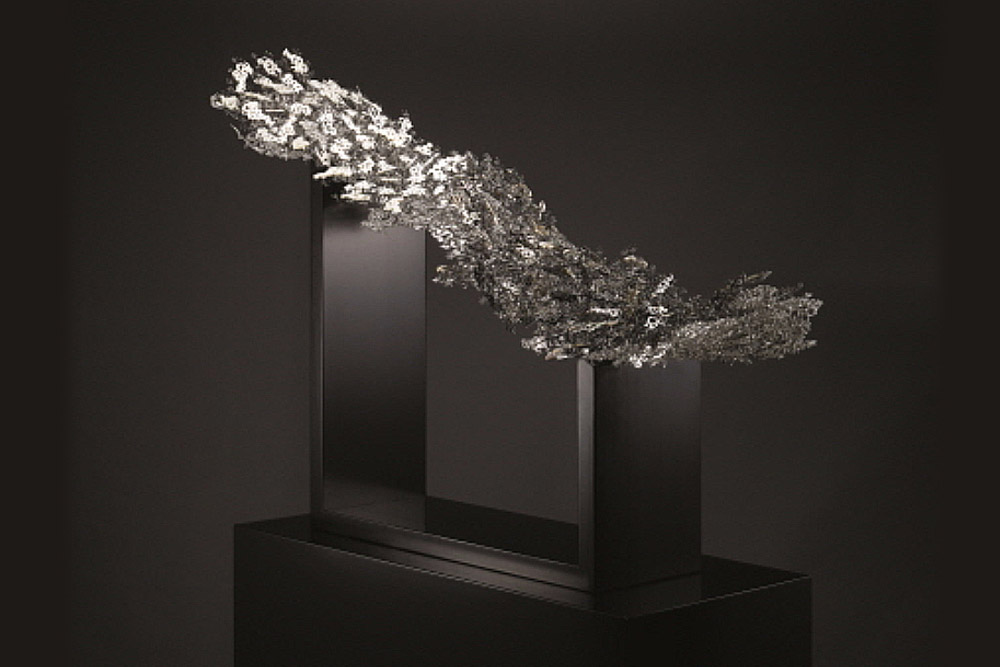 Paola Epifani, otherwise known as “Rabarama,” was born in Rome in 1969. She lives and works in Padova, Italy. As the daughter of an artist, from her early childhood she demonstrated an inborn talent for sculptures. She started her education at the Arts High School in Treviso, and continued at the Venice Academy of Fine Arts. She graduated with top marks in 1991 and immediately started taking part in a large number of national and international sculpture competitions, earning growing acclaim with both the critics and the general public alike.

Rabarama’s sculptures and paintings depict with men, women or hybrid creatures that are often eccentric. The skin of the subject created by the artist is always decorated with symbols, letters, hieroglyphics and other figures in a variety of forms. The membrane or cloak that seems to envelop these figures is constantly changing, always adding new signs, symbols and metaphors.

The alphabet indicates the internal restriction of language and our singular-plural entity (according to the conception of the philosopher Jean-Luc Nancy): hieroglyphics, puzzles and honeycombs are the visualization of the genome, the infinite combinations and possible varieties inherent in humanity, displayed in the mental mazes that materializes the multifaceted complexity of the ego. Exhibitions of Rabarama’s works are often presented in collaboration with other artists or performers (body painters, dancers, acrobats) and are enriched by video projections and sound. Her work is considered suggestive and exciting, describing all the sorrows and joys of the human being, from slavery to freedom through the genetic code of dreams.

Her long path towards success brought her to the 54th Venice Biennale in 2011, and the monumental work “Abbandono,” made entirely of Carrara marble. In addition to this prestigious recognition, her works have been exhibited throughout major capitals including, among others, Paris, Florence, Cannes, Miami and Shanghai. Acquisition of her works have been developed by numerous private institutions such as the Art Museum of the Beijing Biennale, the Shanghai Sculpture Space and Copelouzos Museum of Athens, not to mention the three leading works purchased by the Municipality of Reggio Calabria and the Falcomatà waterfront exhibition. In 2015, Rabarama won the international competition held by the Municipality of Vallo della Lucania (SA). Following this triumph, she created “Leud,” the largest marble sculpture ever created by the artist, now on display in the quaint old town of this municipal.

In 2016, Rabarama exhibited in galleries throughout Italy, including the Italian Fine Art Gallery in Positano (SA) and SimonBart Gallery in Porto Cervo (Sardinia). She took part in the Bienniale of Vught, organized by Van Loon Galleries in the Netherlands, and in the same year her work took her back to her home country, where she took part in the Biennale of Art in Asolo. 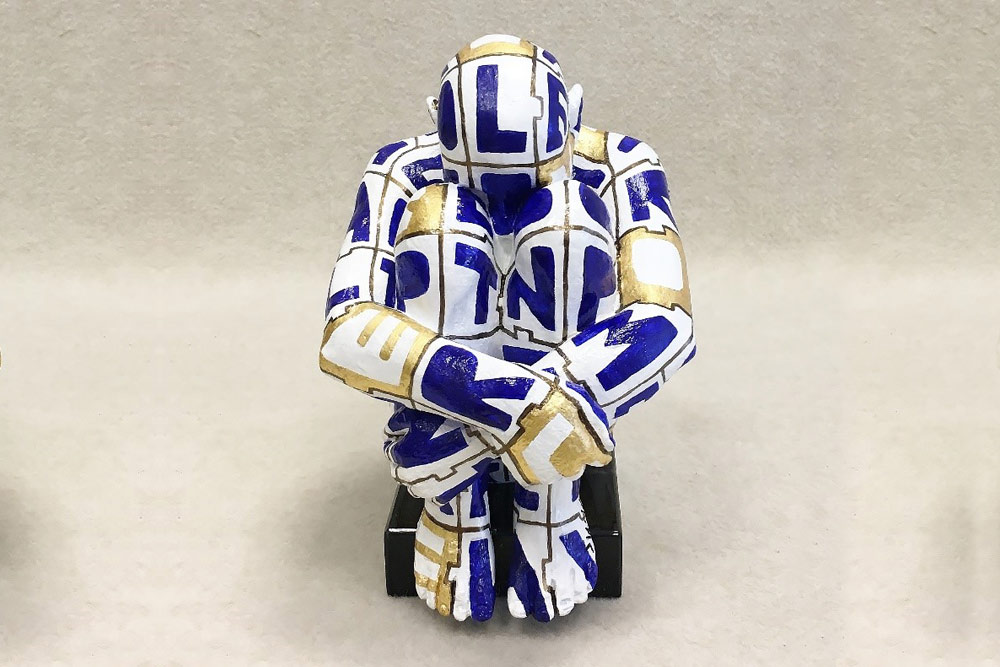 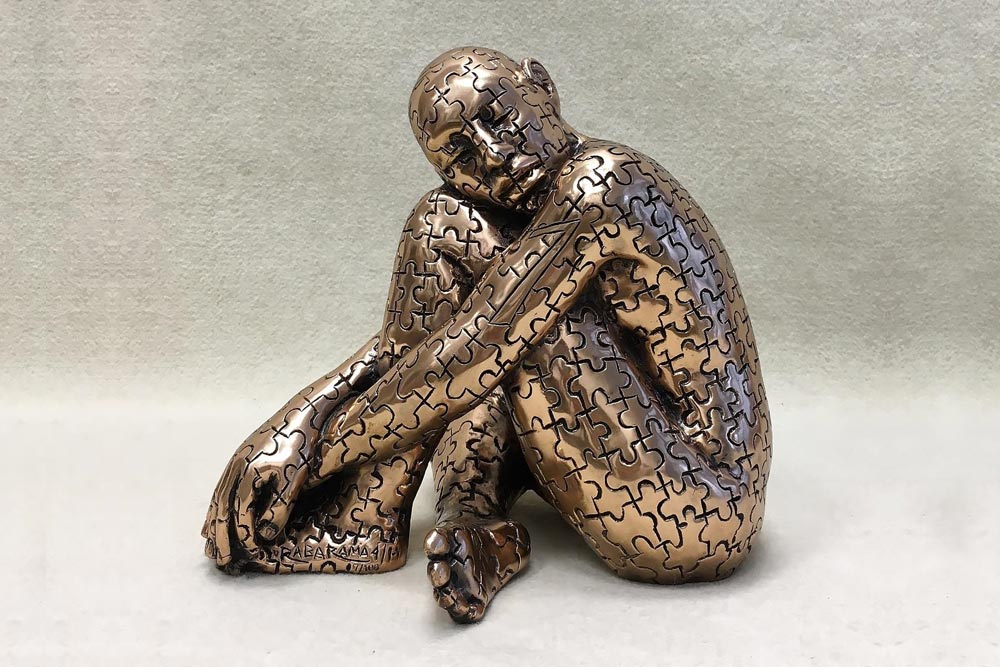 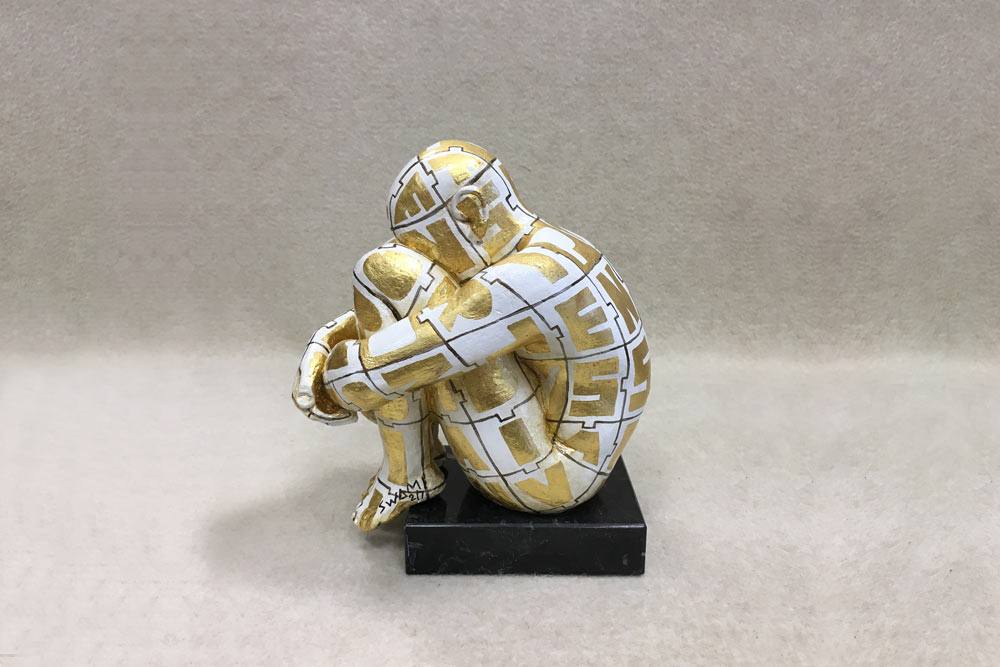 The work of Alexis Silk is timeless. Working in cast bronze, hot sculpted blown glass and steel, she explores interrelationships of humanity, culture and industry. Thought provoking works emerge from the intersection of her fascination with the human figure, passion for her molten medium, and desire for conceptual expression. Silk is constantly pushing the boundaries of what is possible, sculpting her glass figures entirely in freehand while the glass is hot on the end of a blowpipe or punty rod. Her largest figures are close to half her body weight and take a team of six assistants to handle the glass while she is sculpting it. While making intrinsically beautiful objects, her figures are an eloquent exploration of objectification of the body and current cultural issues.

Alexis has worked in top glass schools, including the famous Pilchuck Glass School. Born in Seattle in 1983, Alexis moved to Berkeley California when she was 10 years old. In 2001 she entered the School of the Art Institute of Chicago (SAIC). She quickly identified sculpture as her passion with a focus in foundry. In addition to working at SAIC in cast bronze, she traveled to various countries to explore the more extreme process of working in cast iron. In 2004 she spent six months living, studying sculpture, and learning to fire dance in Madrid, Spain; it was an experience that was both exhilarating and profoundly expanding.

After returning from Spain, Alexis discovered glass-blowing and took to it like a fish to water. Her career began at Ox-Bow Art School in Saugatuck Michigan, working with glass artist Jerry Catania. Working independently at Chicago Hot Glass and at Pilchuck Glass School with Boyd Sugiki, she developed her glassblowing skills. Meanwhile, at Pilchuck Glass School, she was exposed to the sculptural work of Pino Signoretto and was instantly inspired. It offered a perfect intersection of her passion for working in hot glass, her life-long fascination with the human figure, and her desire for conceptual expression in her work.

After receiving her BFA in 2005, Alexis formed Noga Silk Art Glass with her partner Andrew Noga. In 2006 they moved to the Bay Area in California, and in 2008 moved to Alexis’s current location in Energy, Illinois. Today, working under her own name, she has work in galleries, museums and private and corporate collections around the country. She continues to define the frontier of conceptual expression in figurative hot sculpted glass.

As a student of human form, Silk combines her knowledge of anatomy with her passion for fire to create female and male figures in cast metal and blown or solid glass. Her glass figures are sculpted free-hand while the glass is hot, without the use of molds. Many works incorporate steel frames or bases fabricated by the artist; some include found industrial hooks. While making intrinsically beautiful objects, the artist also targets issues of human nature, society, and the interrelationship of humans, nature and industry. Her work particularly explores objectification, body stereotypes, perceptual boxes, and sexuality as strength. Alexis received her BFA from the School of the Art Institute of Chicago in 2005. Since then she has continued to study under glass masters such as Pino Signoretto, Richard Royal and Boyd Sugiki. Since 2006 she has been working full time as an artist. Thanks to skills gained at Pilchuck Glass School and all the places she has gained experience, her work is exhibited in galleries and fine art shows across the country. 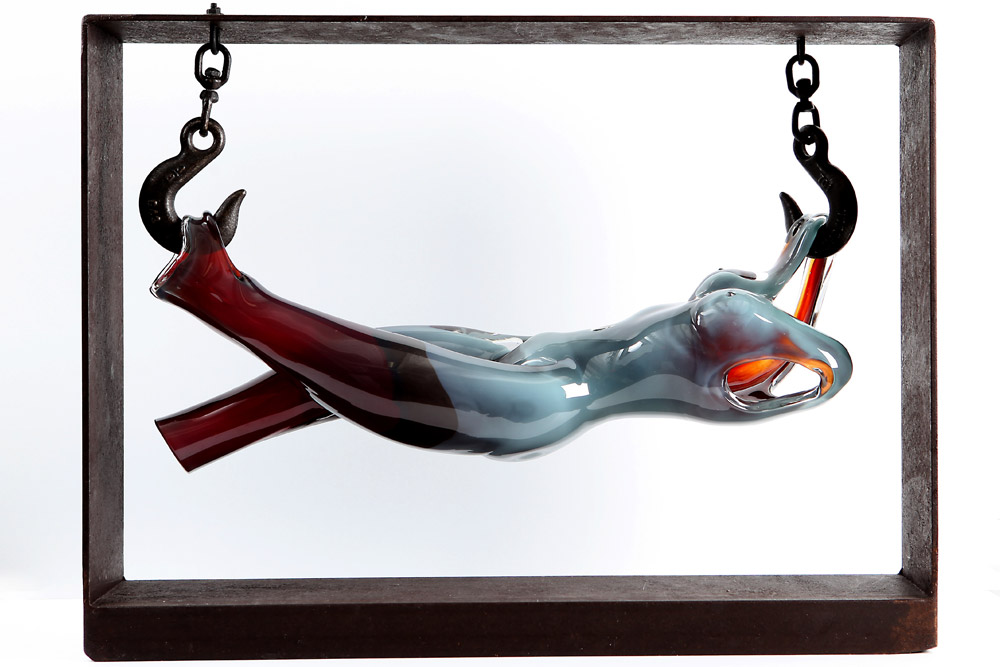 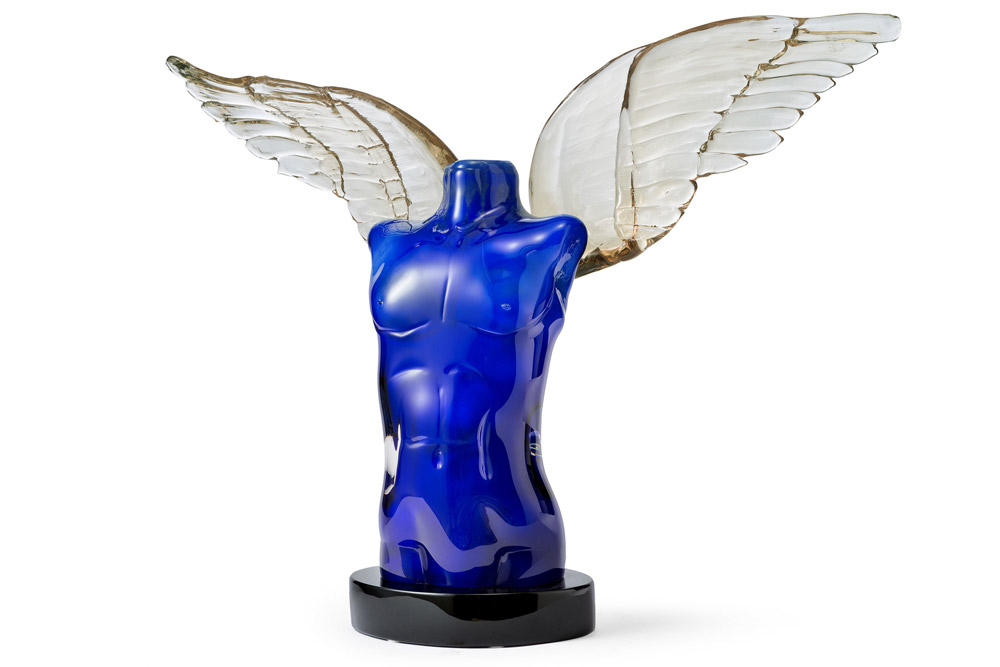 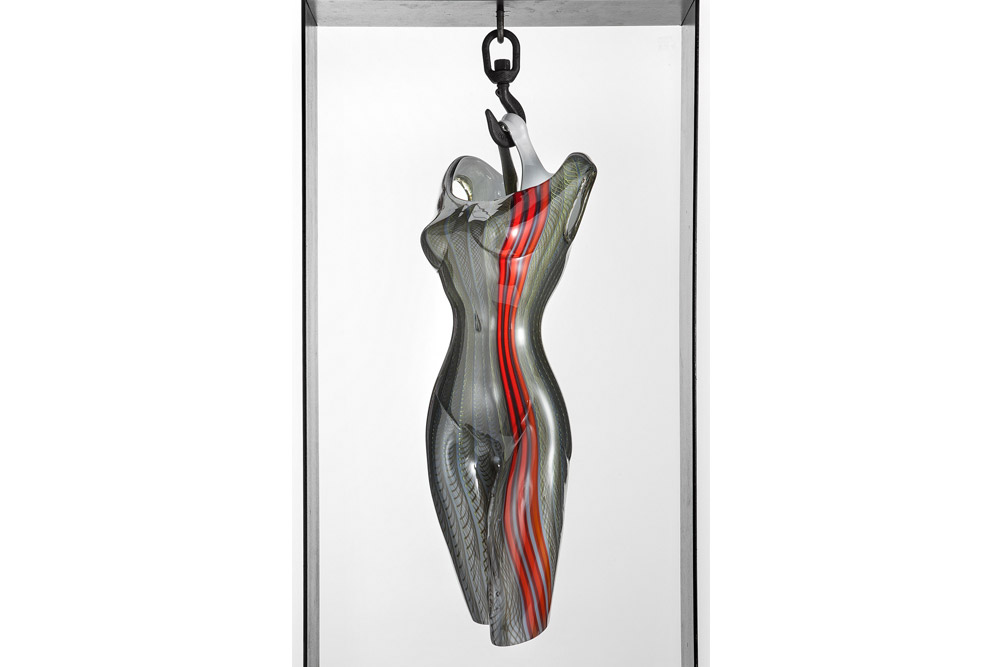