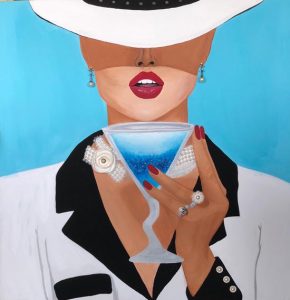 Artist Bio:
As the daughter of a jewelry designer, Aram Amini was raised in constant exposure to the arts and developed a passion for painting early in life. A first-generation Iranian-American, her hard work and academic path led her to healthcare management in New York. Though it was both a promising and lucrative career, she was unable to ignore her desire to create. With the encouragement of her husband, she undertook a massive leap-of-faith and decided to fully throw her life at painting. Her work has since grown and evolved as she’s explored various styles and techniques throughout the years.

Aram mostly works out of her studio in Austin, Texas. Her largest source of inspiration comes from empowered women who express through fashion, as well as various fabrics, textiles, runway shows and fashion editorials. She takes into consideration how her art would differ if she instead lived in Iran, a country where women today are governed to hide their beauty and limit their style. With this in mind, she embraces the beauty of women in her art and portrays how they play an essential role in fashion.

Additional Information:
The Vogue collection is inspired by the 2014 Vogue Paris campaign called “Cocktail D’été”, where each model is styled with bold jewelry and vibrant clothing. Aram collaborated with her father, a jewelry designer, to bring this campaign to life on canvas. She hand painted each piece and used her father’s jewelry along with Swarovski crystals and various gemstones on the canvas.