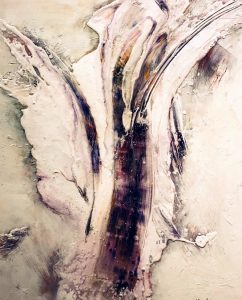 Artist Statement:
I have been drawing abstract painting for over twenty years. Abstract paintings are different from realistic paintings in that they are not bound by shape. They set us free from the bondage of common sense and give us the pleasure of “freedom” in the creative process.

I knead the plaster paste until it becomes thin and smooth, then pour it onto the canvas and make a form with a wooden plate. I struggle with it giving some big strokes. The destiny is sealed in just 4 or 5 minutes when plaster hardening begins. What will it become of? How will it turn out to be? Actually, I have no idea. It is an accidental product produced in my mind. Inner self emerges as I indulge myself in a sense between anxiety and ecstasy.