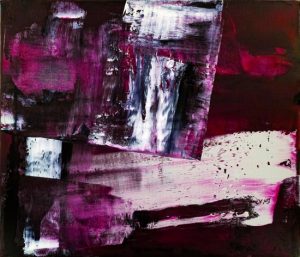 Additional Info:
“All of my paintings are untitled．This painting is my own portrait and this picture is also my portrait. Similarly, this painting and this picture are my other self. They are fragments of life.” These are the words of Tsugiko Ito, a plastic artist, who was born in Hachinohe City, Aomori Prefecture in 1926 and passed away on January 5, 2019.

She slides paints squeezed from the tube, slashes, erases on the canvas on the floor with a gigantic custom-order painting knife blade length of which is about 20 centimeters. She drew pictures in her own style. It isn’t such an easy task as to draw a picture. Drawing pictures mean wrestling itself with herself on the canvas, using painting knife as a weapon for the woman artist saying, “To create a form of life I undergo great hardships, repeatedly waste away from the greatest effort. Then an artwork is born instead of me who is burn out.”

She was particular about calling her pictures “non-figurative” instead of “abstraction (Chusho).” She explained it to the visitors during the talk at Aomori Museum of Art in 2011. “Here is a microphone. To make something based on the microphone is abstraction. My way isn’t such an abstraction, but to change life into the form. By doing so, my life becomes missing. By missing my life I make another life. I keep repeating it. That’s why sculpting means that life changed into the form. It never means abstraction. “Chu” of “Chusho*” means to draw something out and “sho” means the form. I don’t make the form abstraction, but I change into the form.”