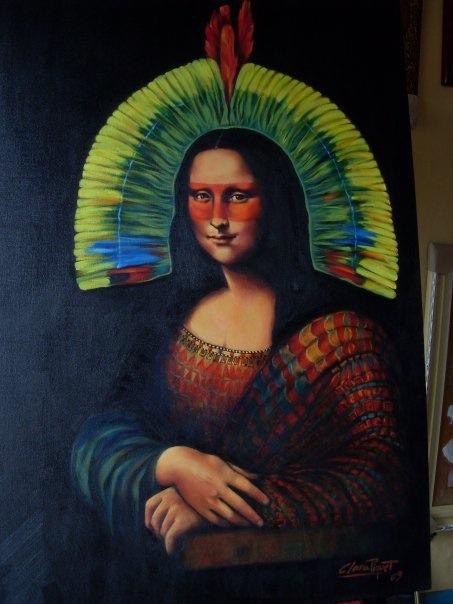 In 1986, she took part in an ambitious project during five productive years, where a group of artists was inspired by the lush of the Brazilian Flora and Fauna, painting ceramic and wood pieces, which were also negotiated in Europe and the United States.

Sponsored by the German government, in the year of 1992, the Ozelot Foundation (Society for Reproduction Research, Management and Behavior of Felines of Brazilian Fauna) invited Clara Piquet to organize an exhibition with paintings of that cats.

In 1995 Clara Piquet began a series of paintings on the Brazilian Indians, searching through books, documentaries and testimonies of photographers who surrounded them, focusing her work on Body Painting and Feather Art. After 5 years, she brought together 50 paintings of all expression that is reflected in the art, according to the belief of each ethnic group.

In March 2000, officially attended the celebrations of the V Centennial of the Discovery of Brazil with five exhibitions in the Federal Capital,

bearing witness to this cultural wealth, which is a heritage that should be respected and valued. Also in 2001, one of her paintings was reproduced as print shirts to represent the Northern region of Brazil, in a project created and sponsored by Fiat Automobiles and was presented at the Motor Show in São Paulo.

As a portraitist, Clara Piquet has executed more than a hundred “Portraits” since her college times, and as a teacher, she has taught drawing, painting and clay modeling.

Centering her theme in the Man / Nature, Clara Piquet believes she has found the way to perfect her art, an inexhaustible source of pleasure!