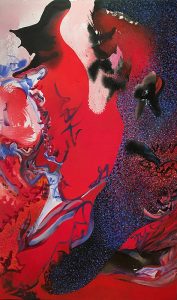 —“After a century of art determined to match the compulsive disorder of the human rearrangement of the world, Ross’s objects make a modest and appealing argument for an aesthetic zone uncluttered by compulsive irony, where at least the memory of beauty can have a little breathing room.” from “Intelligent Design: The Art of Carol Ross” Gary Indiana, Art in America, November 2005

This exhibition focuses upon her artistic breadth, from austere metal sculptures, wood reliefs to her most recent vibrant oil paintings. The exuberant color infused paintings are of ecstatic experience. Filling the canvas with washes and strokes, she defines the painting from within. The sensory experience is her foremost focus.
The wood reliefs are suggestive of her interest in tribal forms and decorative surfaces of totemic objects. Two of the reliefs are part of a series of 28 circular inlaid wood Haida Masks #3 and #9 (2003), inspired by northwest coast tribal art. In 2004 she made reliefs based on the forms of early stone age clubs, knives, spades and devotional objects. Alluding to ideograms, the wood reliefs are like signs from uncomplicated worlds asking for comprehension from our complex culture. Made with cherry, ash, walnut and a red amazonian wood, each one subtly connects to visual and historical human existence. The metal sculpture Waterfall and Cleft (2005) shown at ArtExpo have aluminum laminate surface.

The artist searches for meaning outside time, hence her quest for a timeless form.
Sculpture Magazine in June 2017 reviewed the sculpture as embodying “an iconic, enigmatically numinous resonance that seems to indicate they are significant objects. Thoughtful, mysterious and contemplative without direct or implied reference, they are, in fact pure abstraction honed to a primal honesty, exercises in the perfection of two and three-dimensional composition through rational and intuitive means.” R.H. Chambers