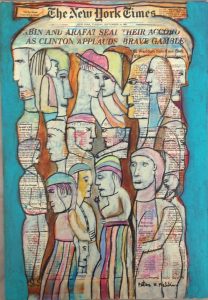 Artist Bio:
The story of Peter Malkin the artist begins in the most unlikely of circumstances, though fortuitously, he was there to record the events, places, and personalities of that circumstance through art, where words alone could not suffice to explain. It was Malkin, the Mossad agent, who captured the infamous Nazi, Adolph Eichmann, holding him in a Buenos Aires safe house, and later smuggling him to Jerusalem, where he would stand trial. During this period Malkin came face-to-face with the literal embodiment of the ‘banality of evil’; his personal art and writings from this period constitute a uniquely informed view of humanity in it’s a most unthinkable moral crisis.

Born Peter Zvi Malkin in British Palestine, Peter Malkin spent his early childhood in Zolkiewka, Poland. In 1936, his family returned to Palestine to escape the rising tide of anti-Semitism. His sister, Fruma, and her three children who remained behind, along with 150 other relatives, died in the Holocaust.

At the age of 12, Malkin was recruited into the Haganah, the Palestine Jewish underground. Later, he was invited to join the new Jewish state’s fledgling security service as an explosives expert. Using his skills as a master of martial arts and disguises, Malkin rose through the ranks. The shadow of the Holocaust never left Malkin’s family, but the chance to seek justice for the murder of his relatives came in 1960 when, as a member of an elite commando team from the Mossad, he was sent to Buenos Aires, Argentina to capture the Nazi war criminal, Adolf Eichmann.

Malkin was the man selected to physically capture Eichmann, guard him during his captivity, and disguise him for the clandestine journey from Argentina to Jerusalem.

During this four-month mission, Malkin used his gift for painting as a cover. On his way to Buenos Aires for the operation, he bought a copy of a tourist guide, ‘The South American Handbook’, and carried it with him everywhere, filling its pages not only with his painted and written observations but with his thoughts and memories. Haunting images of his family, cathartic drawings of Eichmann, Hitler, and Mussolini, and powerful sketches of anonymous figures and scenes, all inhabit this small, intense, visual diary.

This Argentina Journal was to become the essential expression of his art, from which further works developed. Through art and poetry, he recorded his unique experiences and impressions, fought with his demons, and found the sincere intimacy with humanity that was impossible in the lonely life of a covert agent. The most highly decorated Mossad agent ever, Malkin retired from his position as Chief of Operations after some 2600 successful missions. It was only then that his most personal works and writings could be exhibited.

Malkin’s art is grounded in a genuine empathy with the human condition, and an unabashed optimism despite the odds. His love of people, especially children, gave him the strength to travel and lecture tirelessly. Equally comfortable with a head of state or taxi driver, he preferred a low-key, simple lifestyle, savoring long walks through the neighborhoods of his beloved adopted hometown, New York City.

His works are exhibited in the Israel Museum (Jerusalem) and many other important collections around the world and he are featured in numerous documentaries. Peter Malkin’s art is represented by Katherina Perry Gallery, New York.

Additional Info:
As the Mossad agent who hunted and captured the infamous Nazi war criminal Adolph Eichmann, Peter Z. Malkin (1927-2005) came to be a well-known figure when his part was made public many years later.

During his long career as an agent, he drew on personal experience to produce a riveting body of paintings centered on the events and people of these years, as well as his private impressions and memories. Giving voice to one who was by necessity voiceless during much of his life, these images go far in expressing this artist’s unique talent and humanistic vision.

The book, “Memories Through Time”, is a retrospective compilation of paintings produced in the period 1961-2004, both during his years as a covert operative and afterward. The paintings are grouped by country, with additional text including the artist’s poems and notes. 144 pages, with 97 images. Katherina Perry Gallery will be privileged to release this book and exhibit original works by Peter Z. Malkin at the Katherina Perry Gallery New York.