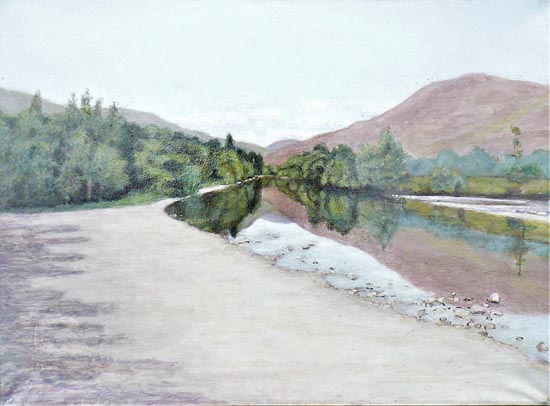 Artist Bio:
Charles Harris is a world renowned Traditional artist who trained at the Royal Academy in London (3 years for Bachelor of Arts and 3 years for Master of Arts Degrees) and who was awarded the Freedom of the City of London for his work and elected to the Livery in the Worshipful Company of Painter Stainers, as well as many other academic prizes.

As a student at the Royal Academy, he was singled out by Britain’s leading art critic Brian Sewell, as ‘one of the six best painters for the future.’ He also participated in an academic cultural exchange visit to Russia where he exhibited and lectured as well as appearing on Russian State Television. Since then his work has earned numerous accolades from around the world and he has received portrait commissions from many famous people, royalty, clergy, military, statesmen and women and sporting celebrities.

His traditional Scottish landscape paintings are also sought for their outstanding beauty and realism. Examples of his work are included in major art collections throughout the world, including both Royal Collections in Britain and also in one of the largest museums of Contemporary Art in Oslo. He is highly respected in the world of Art today for the quality of his traditional craft skills, which are fast disappearing.

Since graduating from the RA, Charles has taken his work on a continuous and highly successful World Tour which has covered major cities in all five continents to hugely appreciative audiences, where he has also conducted Seminars and Master classes in Traditional Painting. Finally surrendering to popular demand he completed his first book and the content for this newly published book, ‘Trust Your Eye’ is therefore based upon a lifetime of irreplaceable and invaluable professional knowledge and experience.