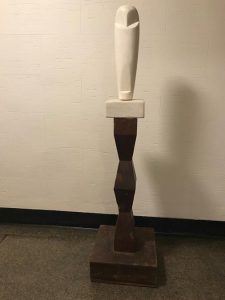 Artist Bio:
The sculptor Constantin Antonovici is one of Constantin Brâncuşi‟s main disciples. This text outlines Antonovici‟s position as a follower of the avant-garde movement initiated by Brâncuşi, who reduced the sculpture to its essence, as well as his contribution towards the consolidation of Brâncuşi‟s new aesthetics.

The biographies of Brâncuşi and Antonovici have some elements in common even though both had left Romania at different times. They lived abroad for over half a century and died away from their homeland. The majority of their works exists outside Romania. Like Brâncuşi, Antonovici has never denied belonging to the Romanian people and culture, and remained faithful to his roots till the end of his career and his life. The presence of the former totalitarian regime in Romania prevented the artist from maintaining a normal contact with his native country.

By the time the Romanian culture eventually opened up to the world, Antonovici was towards the end of his life was full of un-trust, suspicion and doubt, and could not manage to become free of the past and renew the contact with his homeland.

Antonovici had never abandoned Romanian culture despite a self-imposed exile. He remained faithful to his homeland throughout the various travels in Europe during and immediately after WWII, while living for six months in Zagreb, six years in Austria, four years in Paris working in Brâncuşi‟s atelier, two years in Montreal, before finally settling in New York City in 1953.

He confronted the wrongs of the former communist regime with the Romanian flag in his hands on the steps of the Capitol Hill. Tutzi Marton, the co-Executor of the Constantin Antonovici Estate, has eye-witnessed contacts between Antonovici and many personalities who knew the sculptor directly. One Antonovici Archive photo depicts the sculptor in the company of Salvador Dali and the General Secretary Kurt Waldheim at the United Nations, in the early 1970s. If interested to buy any Antonovici sculptures, please contact Stephen Benedict at stebep@aol.com.