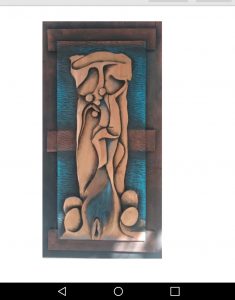 Artist Bio:
David Thebaud (Tebo) was born on January 10, 1980 in Kenscoff. He began to draw at the age of 10 years old under the tutelage of artist Pierre Philippe. In 1990, he created his first pieces in mahogany. In 1995, he met the famous painter Pierre Austin who became an admirer of his talent and encouraged him in his drawings. In 1997, he met the sculptor Jacque Delice who helped him to master the techniques of sculpture and to develop his own recognizable style. He produced his first bas-reliefs at this time. In 1999, Tebo participated in an international art competition organised by the company Haitienne in partnership with Radio Lumiere.

In 2004, he received an award at the Reconciliation Bi-Nationale Competition, the first joint international fair between the Dominican Republic and Haiti. It was organized by Centre Pont Haiti and the Fondation Ciencia y Arte. It was at this time that he initially presented his technique “FOU”, which he had been developing since 1999 and which consists of applying prepared sand to a surface. In 2006, he participated in the first edition of open air creations at Le Montcel (Kenscoff-Belot). This event was organized by the painter Valcin II in partnership with Madame Stephanie B. Villdrouin. Tebo’s work entitled “Grimas Pa Mas” sold at auction to public acclaim. During this same year, he created a federation of artists called “Federation des Artistes Plasticiens et des Artisans pour le Développement de la Culture Haïtienne” (FAPADECH) with a group of Haitian artists and artisans. He held the position of treasurer for the administrative council. In 2007, he participated in an artistic workshop as part of an Agricultural and Work Fair organized on the Champs-de Mars by the Minister of Agriculture. He is currently the coordinator of an association called “Espwa Lavi pou Timoun you” (ELT). The goal of this association is to work with children to enable them to discover their hidden talents.

Recycling in the Art of David Thebaud: In 2003, Jean Herard Ceuileur invited Tebo to his workshop in the Grand Rue where he discovered many artists working with recycled materials. As a result of his contact with the limitless imagination of Ceuileur, he began to collect mechanical and electrical refuse without knowing exactly what he would do with it. It was not until 2011, under the guidance of his friend Magnolita that he created his first recycled work, which he called, “Dekole”. Since that time, he has given himself to this new medium that permits him to enrich his palette while evolving towards new sources of inspiration.

2001- Participated in a collective exhibit in the Dominican Republic. Also exhibited at Chez Rose Bar Restaurant. His name was published in the catalogue of Art Haitien.

2004: Tebo was awarded first prize in the first Bi-National Fair organized by the Dominican Republic and Haiti. He presented his work “FOU” for the first time which utilized the technique of applying prepared sand to a surface, a technique which he had been working with since

2005: He presented his technique to the public at large at the Grill Hours Bar Resto in Petionville, Haiti.

2006: Tebo participated in the first edition of the open-air creation at Le Montcel (Kenscoff-Belot) where he aroused interest in the auction of his sculpture entitled “Grimas Pa Mas”

2007: A work that was part of the BNC Bank collection was bought by the administrative council. This work was exhibited at the BNC branch in Cayes. He participated in the Champs-de Mars Fair with FAPADECH.

2008: Tebo participated in the Haitian-American Arts Expo. He continued his work as coordinator for ELT

2010: November 10-26, He exhibited his work in KIngston and Woodstock, New York at an exhibit to raise funds for ELT.

2014: In September of that year, Tebo presented his first exhibition of recycled works at the Hotel Villa Therese in Petion-ville, Haiti. In October, he exhibited at Canvas Studio in Rumson, New Jersey to raise funds for ELT. In this same year, he participated in the 100th anniversary of Octavio Paz, an important Mexican poet, at FOKAL, under the direction of the Mexican Embassy in Haiti.

2015: Tebo exhibited at the Culture and Creation Foundation “Art and Environment” in Canape-vert, Haiti.

2017: Tebo participated in the 13th edition of Carifesta in Barbados as commissioner of the exhibit “New Wave Haiti”.

2018: January 25-26 – Tebo exhibited in the “New Expression” exhibit at the Hotel Villa Therese in Petion-ville. February: he exhibited in the diplomatic Salon at the Toussaint Louverture Airport, Haiti

Quotation from David Thebaud: The ideal of Fine Arts is to be the light that illuminates all of civilization. He sculpts as he feels, as he sees, in order to raise the profile of artists, artisans and children in the domain of Haitian culture. It is his grand dream.