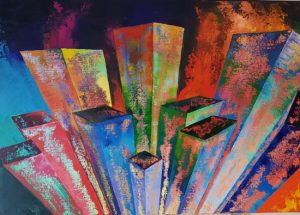 Artist Bio:
Born on 30 May 1979 in Haubourdin in the North of FRANCE, D.E.D. has been fascinated by drawing since kindergarten. As far as he could remember, he always had a pencil in his hand, and for that he thanked his mother who always opened it to all techniques.

After working for 10 years in computer logistics, he decided to live from his Passion full time and therefore took a professional training Diploma of 9 months.

The Diploma of Art in the pocket, D.E.D. opens “Artelier” on Hazebrouck in the north of FRANCE in September 2010, where he gave courses in drawing, painting and modeling to children, teenagers and adults desiring to learn the techniques, as well as to the centres Specialized in the context of “art therapy”. Some adults have been trained in vocational training in order to be able to live their Passion fully and pass it on.
This adventure ended on December 31, 2016…

Since January 2017, D.E.D. has created its artist workshop on Borre in the north in FRANCE under the banner D.E.D. Art. He produces his own unique artistic works, responds to all types of orders and continues to give courses to people who want to acquire the techniques of drawing, painting and modeling.

During these years, he has participated in various exhibitions on Lille, Bach, Hazebrouck, le Lavandou, St Tropez and Carrousel du Louvre in Paris.

D.E.D. appreciates the works of his contemporaries, namely: Andrew Salgado, Shane Wolf, David Jamin and Spark… among others!

He thinks it is important to keep a child’s soul so that art is part of everyday life.

D.E.D. likes to play with Perspective, nudes and Portraits… A set of lights of shapes and contrasts! The more expressive the body or the portrait, the more interesting it is… to the oil painting, acrylic or a simple line with the ink of China!

Artist Statement:
From color are born the Works!

It is the multicolored background that I get on my paintings which guides the finality of the Creation, my choices of Light and Coups of Couteaux to make vibrate the colors between them!
Starting from a simple sketch of Buildings, Buildings, Bouquins and others, to obtain a colorful and luminous perspective!

In Portraits, I search the feeling, whether positive or negative!
Each one of them is worked to tell at best the history of the model having accepted to Poser!
In a stroke with White Chalk, to lay the foundations of the Portrait without having drawn the details,
I paint it with ColourShapers (Rubber Brushes: delicious mixture between the hairbrush and the knife)!
Tool allowing me to get a more rough rendering than the hair brush, but more accurate than the knife,
by games of impasto, transparency and overlays!
Possibility to order the portrait of a loved one that I will customize according to his tastes!

The Work of the Nude, still after Living Model, is made in India ink:
Some traits to capture all the grace or power of the Model.
Nudes flirting between Realism and illustration …

While Finesse, the Geishas are colored with the Japanese Watercolor “Gansai Kunetake”
for its brilliance and brightness, as well as its more intense colors and rich in pigments …
It is used traditionally by the Master Calligraphers to put their realization in colors!
Re-enhanced with a dash of Chinese ink “Chung Hwa” black, intense and pleasantly scented …
since 1865 according to ancient & artisanal methods
Indelible after drying!

My Retro Portraits are the result of a childhood nostalgia, years of carelessness! Just like the nudes the faces flirts with realism and illustration. The patterns are work with ecoline – colorful ink – often use for inking illustrations!