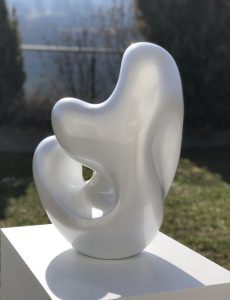 Artist Bio:
MARITTA WINTER (1961, born near Freiburg, Germany) lived and worked in France between 1984 and 2010. In 2011 she moved to Switzerland where she now resides at the Zurich Lakeside. Maritta presented her sculptures at international art fairs throughout Europe, and 2019 at the Biennale of Venice, Italy. It is the combination of movement and architectonic forms in Maritta Winter’s sculptures that has led many of them to be displayed in public squares and buildings, such as in Prime Tower in Zürich, Cultural Center in Hésingue and the Aston Martin showroom.

What influence does the visual environment have on our condition?
To what extent can the sight of balanced, centered shapes (cause) trigger the viewer to balance himself? These are subjects Maritta thinks about. The predominant form is round shapes that brings to mind the generosity of nature, the sensuality of a body and the vitality of dance. Tenderness and strength are expressed at the same time. Her sculptures evoke a sensory world in which the forms are called upon to touch the shapes and to be carried into a beauty and rhythm. Her longstanding engagement with architecture revealed parallels to the sculptures she creates. « It’s a different scale, the effect of shape and color remains the same. »