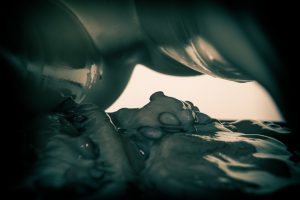 Artist Bio:
CAROL P. GOVAERT (1964, born in El Salvador) grew up in California where she spent her youth and earned her bachelor’s degree in Business Administration. After her study she lived in many countries and now resides in Amsterdam, The Netherlands. Currently Carol is studying at the University of Amsterdam – Literary and Cultural Analysis. Besides her study she is active as a Patron of the Van Gogh Museum in Amsterdam.

After studying at the Fotoacademie Amsterdam Carol started photographing series that reflects her fascination for the shadowy, murky, depraved side of human nature. It gives her peace of mind to be able to bring out what is in her subconscious. She approaches her projects in two ways: intuitively and conceptually. When she photographs intuitively, Carol photographs with a complete sense of freedom: there are no goals to be achieved.

The inspiration for the series Ode to the Dream of the Fisherman’s Wife comes from a class on iconography presented at the Hermitage in Amsterdam. She became fascinated by how objects and living beings were utilized metaphorically to represent life. While researching, she came upon the work by the Japanese artist Katsushika Hokusai. She found the image intriguing and decided to photograph her own rendition. In a further study, she learned that the octopus is often used in many cultures to represent sex. Off she went to purchase her first “Oscar,” and the series flowed out of her during a mad photography session. Three photos out of the series Ode to the Dream of the Fisherman’s Wife will be shown at Art Expo New York 2020.

“Photography is the medium that helps me explore the world, which often confounds me. I exorcise my demons, discover buried emotions, and poke fun at this crazy place”.