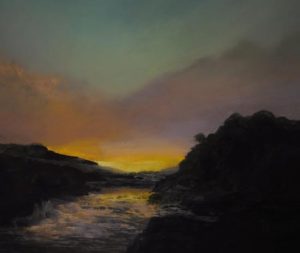 Artist Bio:
In his many travels, John Davis Held spent several months living in an African Hut, before hitch-hiking across Europe to paint the cathedrals, castles, and countryside.

“Is the Universe conscious?” the artist seems to ask. “Is light itself conscious in some fashion?”

His studies in Astrophysics at Columbia University were not enough to answer these questions, and consequently, much of his art is an exploration into these mysteries. His work often has an extraordinary sense of light, and is deeply spiritual. His paintings convey feelings of joy, lightness of spirit, and somehow, a sense of both peace and excitement simultaneously.

John Davis Held is known for his luminous work in pastel and oil, and has had One Man Shows at the Antreasian Gallery, NIH, and the Troika Gallery where he is currently represented. He has appeared on CBS and Fox news, and his art was featured this last December on MPT Artworks as well as being displayed on the 60 foot jumbotron across from Penn Station in Baltimore.

After several years living in Seattle, he now lives in a historic Tudor home in Baltimore with his beautiful wife and their two cats.

John Davis Held landed his first gallery after doing Artscape in 2009.  He did the show for two more years taking full advantage of the priceless feedback and friendships made from a free Arts Festival.

Since that time, he has focused on gallery work, which includes many one man shows in the area, and he is now represented by the prestigious Troika Gallery in Easton, Maryland.

Having gained confidence and grown as an artist, John has decided to dip his toe into one of the biggest art markets in the world by exhibiting his work at Art Expo New York 2019 taking place at Pier 92 from April 4th-7th.

John Davis Held is known for his luminous work in pastel and oil. His work often has an extraordinary sense of light and is deeply spiritual.  His art conveys feelings of joy, lightness of spirit, and somehow, a sense of both peace and excitement simultaneously.

For more information about his work and find out whether he still has some VIP passes to give out, please visit his website at www.johndavisheld.com and email him at johndavisheld@gmail.com or contact Kirsten Held at 410-435-4066.