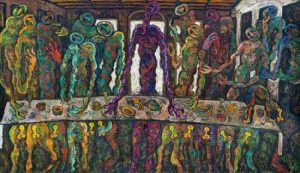 As a flamenco dancer, Lee Shin used her torso and limbs to freely express her flying soul. She started to paint dancing women. Other than that, she has been taking care of strayed cats for more than 20 years. Cats have been the most important companion in her life. Nowadays, Lee Shin lives near the coasts of Tamshui, Taipei, she also paints the seas. Sea waves have also given her energy and inspired her in the creation of her artworks.

Her paintings, to sum it all, have always been true to her life, which has been infused with the vitality by the fervent relation between man and woman, cats, dancing and the sea.

Artist’s Press Release:
Before the year 2,000, the style of her paintings exhibited the flaming and wild passion of women. She tried to reexamine men from the point of view of a woman liberated from traditions, and subvert the traditional carnal relations between the sexes.

In one of her paintings, she took the female dentist as the theme, considering her former well-practiced profession. The female dentist strides over a terrified male patient, with a pair of huge dental nippers in one hand. Lee Shin says, a man is the weakest and the most helpless when he is lying on a dental chair, while a woman dentist holding a pair of nippers, signifying the ability to cure disease, is dominant in power relations.

In the series of “Woman Painter and her Man Models,” she outlines the sexual implications between a woman painter with a brush and a nude man model. A woman is no longer playing the passive and coerced role, instead, she knows exactly what she wants and needs, and creates a series of frenzied sexual imagination with the help of the Muse.
Her paintings at that epoch consist of another series “Woman & Man,” which subverts the traditional oriental sex relations which emphasize man up/woman down, man big/woman small, man give/woman take. In the series of “Man Taking Shower,” a woman starts to view man by his corporal beauty, instead of seeing him as the economic supporter.

In the 1990s’, Taiwan has been going through the transition from tradition to modernity. Lee Shin’s works were being welcomed and discussed, particularly in the forums related to gender studies.

Additional Info:
Lee Shin’s version of “The last supper”, which is a derivative work of the masterpiece by Leonardo DaVinci, consists of a lady standing in the middle of the frame surrounded by a group of twelve men. A lady, which is emblematic of a maternal figure, has a natural tendency to look after men. And by men, which as a matter of fact, boys, who could never grow up deep inside. One day, Lee Shin plans to invite all her ex-boyfriends to the supper.