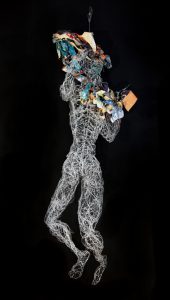 Artist Bio:
Yunus Chkirate is the descendant of Moroccan and Italian parents. From a young age, he demonstrated strong artistic skills and an expansive imagination. His mother, being an artist and fashion designer, exposed him to many factors, which influence his painting today.
Yunus pursued his studies in social sciences and fashion marketing. The combination of these two disciplines developed his sense of socio-cultural understanding and creativity. While working in the fashion industry, Yunus gained knowledge of color and visual aesthetics. He used fashion as an art form. This allowed him to test his love for creating, thus laying the foundations for his own artistic process.

After making a strong impression in the Montreal art scene by selling out his first solo show in March of 2011, Yunus continued his pursuit of the arts by participating in group and solo exhibitions.

In the span of eight years, Yunus Chkirate has developed into a sought after visual artist with a growing list of admirers. His works are found in collections across the globe and he is also a widely commissioned portrait artist.