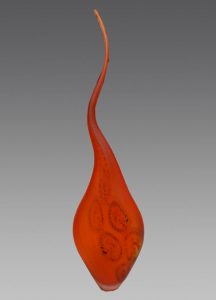 Artist Bio:
Afro Celetto was born in Venice, on Burano island, on August 24 1963. Much quieter and less crowded than other Venetian islands, Burano is quite colorful, the facades of the houses were painted with brilliant colors so the fishermen could identify their own houses from far out at sea.  In his childhood, surrounded by colors, Afro developed a unique sensibility, that joined with his innate artistic sense, took him to the artist’s world.

He started working with glass when he was 14 years old, apprenticing with the legendary Lino Tagliapietra. During his 12 years as first assistant to Lino Tagliapietra, Afro had the opportunity to learn from one of the greatest living glass masters. Since these early years Afro has been producing some of the world’s most beautiful artistic glass, becoming recognized by collectors for his technical ability and artistic expression.

After many years at “Effetre International”, Afrt took his skills to “La Murrina” as “First Master.  There he specialized in two of the oldest techniques: filigrana and murine. Four years later, Afro returned to “Effetre International”, after being asked to replace Lino Tagliapietra, who had moved to the United States to open his own studio.  For many years, Afro worked within the old tradition, where great glass masters executed the designs of others. In year 2000, Afro opened his own studio where he started creating brand new art pieces following his own inspiration and establishing his own style.

Around 2004 his artworks, the result of a combination of classical techniques and modern colorful shapes, became famous and requested by collectors and galleries all over the world.  He collaborated with the great Pino Signoretto, famous master for sculptures in “heavy glass”, member of the “Dale Chihuly Team”

In 2009, trying to investigate new shapes and colors, elevating his production to a better level, he decided to stop production for a year.

At the beginning of 2010, according to Nicola Foccardi, alresdy CEO of Lines Murano Art (ex Linea Mazzuccato), a famous glass company in Murano, Afro had started a new adventure founding a new company, Art Glass Studio, That is taking him beyond new frontiers of colors and shapes.