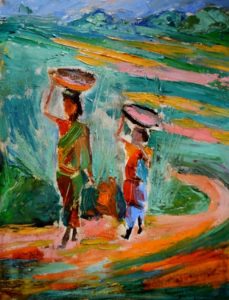 Artist Bio:
Giorgi Bliadze was born in 1977, in working class family in Surami ,Georgia. His father Yuri Bliadze was production manager in Agara’s juice factory; his mother Liana Labadze was a senior technologist in Gomi’s distillery.

Giorgi was precocious child. His nickname is Giga Surameli according to his birthplace. Finished school in 1994 and enrolled at Ivane Javakhishvili Tbilisi state University of Tbilisi, Georgia, a faculty of History and Political Science. Giorgi was engaged in various exercises in the study: psychology,theology, physiognomy, astrology,anatomy, philosophy and more.
.After graduation of the university, he entered at Tbilisi Apolon Kutateladze’s State Academy of Arts, at the Faculty of Monumental painting.

During his artistic career, he conducted many experiments,as well as the painting of the materials in terms of durability, his works performed in many styles as well as a variety of different technologies. Also he makes his own canvas for paint.

He loves to travel and he travels a lot, and that helps him to affix his emotions into the canvas.Giorgi Bliadze is one of the contemporary artists and muralist of modern era. He was born in Surami, small town in the center of Georgia. His artistic name “Surameli” derives from the name of his birthplace.

Giorgi Bliadze is one of the few artists who has inherited the excellence of the ancient masters.The compositions of the artist have one thing in common, it is the reflection of the Earth and humankind.
“When Artists speak about their artworks, they are not artists anymore but the writers. The colors and canvas have to tell us the story about the artwork but not the artists themselves” – he always says.

After graduating the university, majoring in political science and history, Bliadze realized that he would not ever be a politician. Sooner he enrolled in to Art Academy, dedicating himself fully to the Art life.
He works with all kinds of mediums but prefers oil paints above to all others.

Giorgi had showcased several Exhibitions in Germany, USA , Georgia, Armenia and in Santiniketan, India.Indian experts were proud to showcases his works in the Academy of Fine Art, Kolkota, India.
Giogri’s ;paintings usually conveys greater part of landscape, beautification of human being, abstaction in avant-garde style and some aspects of non-religious and liberation of soul.

Additional Info:
He studied which medium could be saved for ages and came to a conclusion that the paintings with oil paint have brighter colors and longevity. His studies became the major factor for the artist to devote his time not only to creating timeless masterpieces but to putting efforts on the techniques and quality of his works.

Through the color palette he invites the viewer into a spiritual contemplation of the natural terrain, make them to feel the sensation and emotion of the powerful nature expressions. Bliadze challenge the viewer to treasure the wonders of the land and admire with beauty of the colors. He showcased his artwork in many different countries like: Georgia, Armenia, Russia, Germany, India, US.  Bliadze’s works being possessed by the art collectors of these countries.
The artist is multitalented. He is not only full time artist but he is a researcher, experiencing different technologies such as Venetian plaster, cloisonné enamel, forging metals for knifes and religious icons(images) .