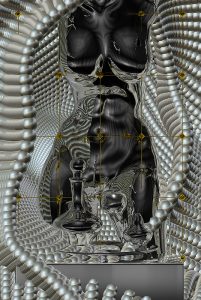 Additional Info:
BETWEEN VIRTUAL AND PICTORIAL
Combining two bright and even brilliant artists, who seem completely different at first glance, in one project, is an incredibly difficult task, a real challenge and a manifestation of an author’s courage. Alexander is a master of skillful artistic plasticity, colorist, retrospectivist, visionary, an “engineer of human souls”, full of subtle irony. Konstantin is a born analyst of facts, bravely breaking into the world of virtual labyrinths, digital technologies, innovative means of concept expression. There are, however, certain original, underlying impulses that would allow to compare two seemingly different creative programs, presenting the viewer with a possibility to draw an inspiring feeling of entering a universal endlessness through research and aesthetic transformation of human image. In both programs the image, the body, even the virtual sculpture of Adam the forefather, addressing the icon-painting prototypes, is a unified mystical and symbolic model of the Universe. The portraits by Alexander are multidimensional, layering philosophical connotations, devaluating the familiar shape and assembling its pieces into a new super-expressive artistic integrity. The stereo-light panels by Konstantin are a metaphor of flawless female corporality in the glow of mysterious objects with their jewel-like shine. The human inner essence, showing through appealing exterior, reveals its surreal, virtually mystical entity, charged with the energy impulse of the infinite Universe. The humanity, while remaining visible and inseverable from the art, becomes a magical image, emerging from the depths of subconsciousness and accumulating eternal virtues of metaphysical beauty, life-building dynamic, unstoppable pulsation of thought.