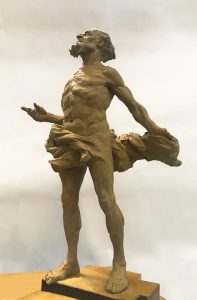 Artist Bio:
The work of Carlos Benavídez is one of the most interesting mergers of today between technical virtuosity and sensitive expression.

It can be framed inside contemporary realism, but it would be unfair to just define it that way, because his work also lives in constant tension between hyperrealism and expressionism.

His sculptures touch the perfection of mimesis, but incredibly they do not fall into the fictitious hardness of excess technique, his expressionism on the other hand is palpable and fundamental in the result of his pieces.

He is undoubtedly the most important portraitist sculptor of our time, and in the monumental he recovers the path of Rogelio Yrurtya; he said about Benavidez…. ”He gives the clay that which still has no name, some say spirit or soul , life, shine or anima, that which makes their works moving, where the eyes look and are looked at, the bronze hands become warm or the wind moves the concrete blocks, because they bear their mark. ” Ricardo Celma.

Carlos Alberto Benavidez was born on April 8, 1963 in Córdoba, Argentina. He studied at the provincial art school “Figueroa Alcorta”.

Chronology:
2002: He begins with the series «Tribute» (serial busts of 20 cm of prominent personalities of culture, politics, sports, etc …)

2010: He was the winner of the National contest to make the monument to Mercedes Sosa, in the City of La Plata, organized by the Cultural Institute of the province of Buenos Aires. This piece was placed in the amphitheater of Martín Fierro Lake in that city. It measures 3.20 m high.

2012: He was named a member of “Portrait Sculptors of The Americas”, invited by Stuart Williamson and Heidi Maiers, sculptors of international prestige. This association brings together the best portraitists in America.

2014: He made the first monument in Argentina to former President Juan Domingo Perón, won by competition held by the Legislature of the Autonomous City of Buenos Aires. It measures 5 meters high.

2016: He made Juan Manuel Fangio for Mercedes-Benz Argentina placing him at the entrance of the Industrial Center of Virrey del Pino. This monument represents it on a human scale next to the Mercedes-Benz W196.

Begins the series «tribute sculptures» of the 10 most important athlete in Argentine history in the «Paseo de la Gloria» in the aristocratic area of Puerto Madero. All 2 meters high.

Distinctions
In addition of being the favorite sculptor of numerous collectors and private entities, he is the national sculptor with the most public statuary in the country.

As a result of this and its quality increasingly recognized in the world, in 2019, and despite being an artist born and raised in the city of Córdoba, he was highlighted with the exclusive merit of Outstanding Personality of the Culture of the City of Buenos Aires (Federal Capital of the Argentine Republic).

Today, already enjoying success in the artistic world and popularity, all achieved after his enormous trajectory and effort, he plans to spread to the world through «Sculptures Benavidez», his art company, «Beta Foundry» and «Foundation Carlos Benavidez».