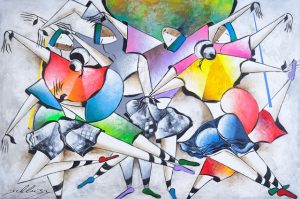 Artist Bio:
David Schluss, born in 1943, began studying art at an early age. He was fascinated by form and texture even as a child and as a young boy was eager to paint. He attended school in the ancient city of Jaffa, the historical seaport in central Israel. It was there that the mystical walls of the city and the austere religion of the historic churches, temples and monasteries captivated him. It was during these early years in Israel that Schluss sensed his overwhelming desire to paint.

Unable to afford the necessary painting materials as a young artist, Schluss began sketching with charcoal and cheap pencils. He gave his sketches away to anyone who showed interest in his work. His main objective was the development of his craft.

During his early 20’s, Schluss and his family migrated to Montreal, Canada and in 1969 he enrolled in the renowned art school “Ecole des Beaux Arts.” Soon after, he began teaching private lessons to other students of the school. In 1971, he pursued his interests in art education at the University of Sir George Williams in Montreal where he earned his fine arts degree.

Influence from great masters such as Chagall, Miro, and Botero inspired Schluss to create his own individualized style and technique of painting. He began experimenting by using different techniques. Once when working on a painting he created an area on the canvas which he did not like. As artists do, he grabbed a rag to wipe the area of its image and in the process made an accidental discovery. The image that he had created by using his hands and a rag was far more interesting than what he had created with his brush.

It was this lucky accident that prompted Schluss to start painting with his hands. Since that fortuitous day, the Israeli-born artist has never looked back and continues to this day to paint his works by using no paintbrush or spatula. He explains, “I must feel and sense the canvas as it takes its personality from the oils and materials I use. I don’t really know at the beginning what will develop. I start with the abstract, and figures emerge. With the palm of my hands I can get a play of light that I could never achieve with a brush.”

Schluss begins his process of creating by applying a combination of gesso, glue and egg white directly to the canvas. As this concoction dries, interesting textures appear onto the surface of the canvas with an exceptional 3-dimensional quality. Using his fingers as paintbrushes, he sketches his composition with black oil. He then applies the colors to the images with his fingertips and gives them dimension by creating light and shadow with the palm of his hands. In the early works of David Schluss his images were a bit melancholy. Although somewhat somber, these images were universal in their mood. “The thought, the look, the position could be myself-could be anybody,” Schluss says, who expects his viewers to interject themselves as an element in his paintings.

His recent works reflect celebration, joy and enthusiasm rather than sadness and sorrow, which he attributes to his move from chilly Montreal to sun-drenched Florida. It is with this unique insight that Schluss creates his joyous playful images. Elegant musicians and dancers adorned with rainbows of color are signature figures that appear in his current works. Their whimsy and gracefulness exemplify the beauty of his artistic style.

David Schluss continues to perfect his painting technique in his studio in Fort Lauderdale, Florida that he opened in 1983. He travels back and forth from Florida to Israel drawing inspirations for his work.

Recently Schluss embarked on a new creative endeavor, which turned out to be a very gratifying medium; bronze sculptures. Since Schluss has always felt that he “sculpts” his paintings onto the canvas by using his hands, this new medium allows Schluss to transform his style into three-dimensional bronzes. The subdued, soft-colored patinas are hand applied to each sculpture creating a sophisticated elegance to the image. The figures from his paintings truly come alive in these limited-edition sculptures.

The works of David Schluss are exhibited in art galleries all over the world. The artist travels frequently doing one-man shows throughout the United States and South America. His works have been displayed in the Teffen Museum in Israel, the Sheraton and Hilton in Tel-Aviv and in many private and public collections throughout the world.

As David Schluss persists on challenging himself with new creativity and artistic experimentation, his works continue to flourish with originality and vision. Through the eyes of this artist one can be lured into his magical world of hope and joy and can be enlightened by the inspiration of his paintings. 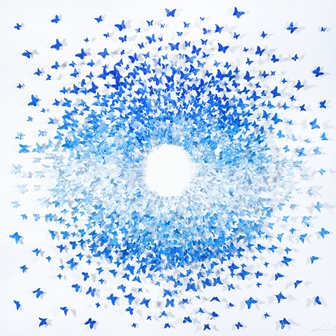