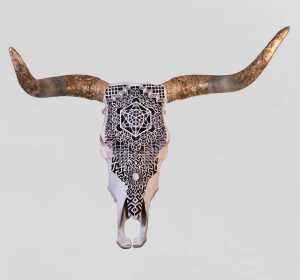 Hector Guillen uses the word sagrado, meaning “sacred” in Spanish, to describe the process of painting animal bone with his tight network of vibrating patterns.  Using a primacy of line, like Keith Haring, and deep-rootedness in his heritage, like Jean Michelle Basquiat, Hector aims to express wider themes of universality, interconnectivity and infinity.

Interested in creating ‘mindscapes’ for our minds to wonder into, he gives the viewer an opportunity to get lost in the realm of his creation, completely releasing control over what might be found. When working with canvas, Hector pours and sculpts the lines with dimensional materials on top of already painted patterns. Those lines, in turn, create boundaries where resin can be morphed into particular shapes, creating lustrous pools of glass strategically spaced throughout the piece.

Born and raised in Panama, Hector grew up surrounded by the patterns of nature. The lush rainforest and the Latin American folklore have greatly stimulated his imagination as a child. Music and martial arts have also been instrumental in carving his path as a visual artist. Hector composes music and draws simultaneously, as if the lines were a direct interpretation of the sound.  Extensive training in Muay Thai gave him the discipline and the patience to develop and execute complex pattern compositions.

Hector holds a University degree in Art and Design from Universidad Latina in Panama, and has been exhibiting his art regularly since 2010. His works can be found in private collections in Europe, Panama and the US. Hector’s most recent exhibitions include Rothener Hoff Gallery in Germany and Contra Galleries in New York (2018). He lives and works between Panama and New York.