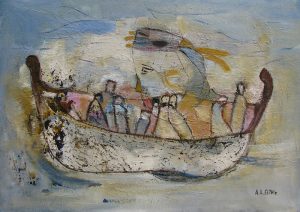 Artist Statement:
To be an artist is as natural as breathing

I was born and I am still living in Kalix Sweden. My path to artistry began in 1978 with textile but for several years I have been panting, with mostly watercolor, oil, and acrylic. In the last few years, I have also been working with wood art. My signature before 1989 was A.Ståhle and A.L.Ståhle subsequently.

Through the years, I have participated in a number of Scandinavian and European exhibits and also a few in China, Japan and U.S.A.In present day I am internationally renowned with honorable mention as Sweden´s 100 foremost now living artist and I am represented in several public institutions, corporations and private assemblies.

The step between macro and micro cosmos is not far. The depth of time, and nature;s everlasting presence in the rhythm of creation- through past, present and future- and all of memories which is part of the fabric on the thread of time.

In my artistry, harmony and life force where humanity interplays with the forces of nature of how creation function – is the core in my ability to create. That in a world filled with chaos to be able to show the alternatives. Nature vibrates with a rhythm, a pulse,and musical strings of notes. We are all part of its entirety. It is we who decide.