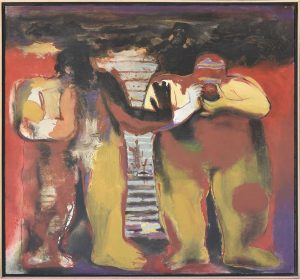 Artist Bio:
GILBERTO ACEVES NAVARRO
He is one of the greatest examples of Abstract Expressionism in Mexico. He Studied at the “La Esmeralda” National School of Painting, Sculpture and Etching. He has participated in over 320 collective exhibits in Mexico, as well as in important cities around the world. He has also held over 150 individual exhibits in museums and galleries, both nationally and abroad. Internationally, his work has been shown in the following cultural spaces: Workon paper for the XIII anniversary of the Rayo de Roldanillo Museum in Colombia in 1994, Gilberto Aceves Sagacho Exhibit Space in Tókio, Japan in 1992, 7000 ways to trap a unicorn in Norddeutsche Landesbank in Hanover and in Hamburg Gérmay in 1996, at the Mexican consulates in San Antonio, Texas, Washington DC and Montreal among others.

In 1952 he worked next to David Alfaro Siqueiros on the murals at the Chancellory of the UNAM. In 2003 he received the National Prize of Art and Sciences for Fine Arts. In 2011 he received the Golden Medal of Fine Arts and the Carlos Monsivais’ Meritorious Cultural Award by Mexico City. In 2014 he received an award by the UNAM recognizing his 40 years in academia. Until his death he imparted a drawing workshop.