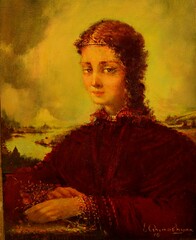 Artist Bio:
When nature is intertwined with him, essence and romance is embodied in as noble expression, this means, that in inner silence an artist’s Vardan Ghumashyan create the picture. This incredibly beautiful leads to the knowledge of nature, best described by the artist himself in his book ‘ ” On the Life of Art and about the Art of Life”, where he invite you and he escort in this amazing journey. ’’THE SUPREME HAPPINESS OF PERSON IS ATTENDANCE OF GOD ‘’ ‘’The presence of God means higher constructive activity of man, common principle which is Genesis (Life). Creation man in Genesis (Life) must be in an absolute consent with nature , it is achieved through inherent freedom , and in simplicity. Only in that case the nature exposes its vital mystery of rebirth and person raises to a much higher spiritual level penetrating into depth in essence times. ‘’

A life in the small town of Old Nork, located on the high rocky mountain ancient Armenia, after three daughters, on June 26, 1963, the was born boy, the last of the children to the family artisan, of the fearless warrior of the Second World War, Parkev Ghumashyan. The mother of the child Anahit Jamalyan, the daughter repressive and execution 1930 year. Never by see the father, she grew up an orphan. The family moved to the capital city of Yerevan soon. From the age of five, the boy began to draw. The drawing, become his the game on asphalt, with chalk that he had found on the ruins of an old building. Seeing this, his father, who was older than his 40 years, took to the studio a beautiful artist drawing artist to Professor Vardges Stepanyan’s. It become for 16 year young boy destiny.-providence. Studying the basics of the drawing, Vardan soon felt the full power of studio training, and these three years from 1979 to 1982 in the workshop will become the basis for its formation, and he gratefully recalls his wonderful master- teacher. In the future, not an Art College, before being drafted into the army in 1982, not after the University of Arts, 1986–1993 years in Moscow, were not so significant, and in the future he became a fighter for the restoration of -bottege- .

Additional Info:
Since 1993, he began his work in the field of art and education already in his own country, the Republic of Armenia . The artist teaches painting at an Art College after P. Terlemezyan at the same time receives a spiritual education with the right to teach in spiritual center St. Echmiazin. In these hard years for his country, he organizes his studio and teaches children about beauty. In 1994, in center the city’s children’s creative , he draws and shapes the Museum of the Warriors of the Liberators of the volunteers who died in Artsakh. His studio in ”Shirakatsy Lyceum” brings three international gold medals Lidice 2004-2005-2007 years, and he himself is honored with a medal for ”Impeccable service” . Collaborates with the Venetian Congregation of Mechitarist and since 2009 he has be the deputy director for culture and education in the seminary of the Congregation of Mechinitarist in Yerevan. Since 2004, he has been writing the book ” About on the life of art and about on the art of life” , where revealed him world outlook. ‘’….. all nature lives on the fundamentals of universal cosmos reality truth, that we call the law of nature. The study of nature by science we do not explore the phenomenon itself, but its influence. By Art we penetrate inside revealing not the phenomenon itself but its essence. Without science, the universe will collapse – Without art, the universe will be lifeless” The artist for over 25 years engaged in yoga and leads healthy lifestyle delving inещ silence. The artist has never been married and has no kids. Everything in his life is intertwined in art. He says “……when you read nature, you enter into the aura of creation. A huge wave of Energy falls on you, and who can bear up is this onslaught and in him art is born”. He is the artist is not a process, he is an artist the results of creativity and his creative active life of the artist continues. 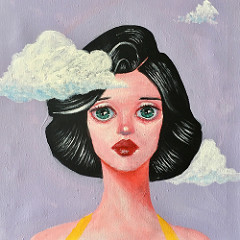